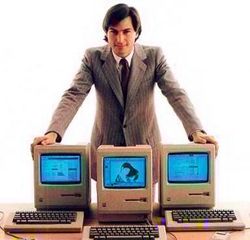 Apple slogans remind me of doublespeak, those phrases made popular in George Orwell’s novel 1984, like war is peace and freedom is slavery.

Steve and company want you think different, yet Apple fans all think alike. Should Apple make an iToaster, you can bet their morning bagels would be placed into one of them, and come out branded with a nice little Apple logo on it’s side.

The I’m a Mac and you’re a PC commercials make me laugh, because a Mac nowadays is just a freaking PC inside. I’ll give them credit though, they’ve taken a Unix operating system and made it user friendly. I can’t see myself paying double the price for a laptop just because it has a giant glowing Apple logo on the back of it, your mileage may vary.

Mind you, I’m not a bigot, I’d love to get my hands on a used Mac mini and throw Debian on it for a low-power web server. I do own a 5th generation iPod, but I ditched iTunes for foobar2000 with the foo_dop plugin. My son owns an iPhone, it’s a neat wireless device, though I got my eyes on an Android phone because I want full control over my devices.

Now, for you fans of the Cupertino based company, I give you iHype, a neat little web page showing the latest Apple news from different outlets. The slogan, Don’t drink the Kool-Aid.

Someday they won’t let you, now you must agree
The times they are a-telling, and the changing isn’t free