What can I say, it’s my partner in crime. 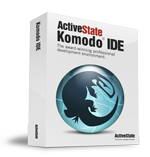 The recently released Komodo IDE 6 adds more features to an already excellent IDE, but instead of getting bloated, things are actually speedier in this release. Since Komodo is based on the Mozilla platform, I feel right at home, like if Firefox had a really awesome add-on that assisted you in programming.

Komodo IDE runs on your operating system of choice, I can fire it up on my Windows 7 desktop and continue coding on my Debian Lenny laptop without missing a beat. With APIs based on XUL, XPI, XPCOM, Python and JavaScript, it’s a very extensible coding environment with an ever growing library of add-ons. My favorite add-on for 6.0 is a MySQL Database Explorer, now I don’t have to leave the IDE for anything, other than to get a cup of coffee.

A programmer’s coding environment is something he or she has to feel comfortable in, the net is littered with Emacs versus VI discussions. What sets Komodo apart is that it’s an environment that anyone who wants to try their hand at coding will have a helpful partner in their journey of discovery. Because that’s all that programming is, a series of aha moments until it becomes second nature. Then it’s time to do it all again when the next best programming language comes out, rinse and repeat.

A few months back I embarked on a journey to enhance the cross references at PHPXref, without Komodo, I don’t think I would of taken the trip. All along the way, the IDE would highlight lines that required my attention and popped up code completion prompts to aid my programming efforts. The languages I skillfully juggled were Perl, HTML, CSS and JavaScript.

The finished product at PHPCrossRef is a testament to using the right tool for the job.

I am the Lizard King
I can do anything